skip to main | skip to sidebar

Does anyone else get freaked out by this? 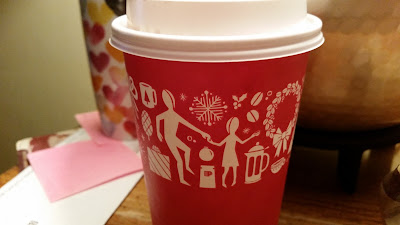 This year's theme seems to be "Merriment and LSD."
Posted by Lady J No comments:

Pink and Green Fuels the Machine....or something

Watermelon and green apples.  I'm not one for Granny Apples,  but I decided to juice them, with the wa-wa, and it was a thrilling combination.  I felt the goodness inside. 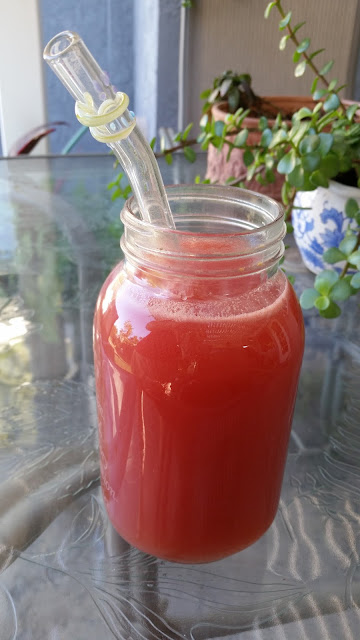 The Polyphonic Spree and their 15th Anniversary Tour

Last night sparkled. The Polyphonic Spree ,  played at the El Rey in Los Angeles, as part of their 15th Anniversary Tour. For those of you who are familiar with the El Rey Theatre,  you know that it's a small venue. This excited me, as I knew this would create a sort of intimacy. 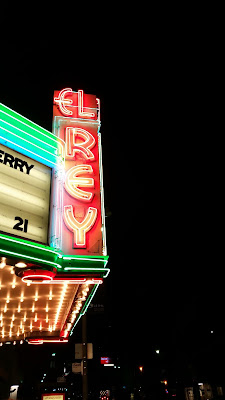 My first experience with The Polyphonic Spree took place at The Derby (R.I.P) in Hollywood.  The Derby was a landmark venue, and one of the several spots where I would swing dance.

The Derby was a tight squeeze, so watching this 20 piece band in such close quarters was intense.  After their first song, all was quiet. It was a...somebody say something kind of tension.  While we stood stunned,  one of my fellow attendees said;  "DID THAT JUST HAPPEN? !" The rest of us laughed, grateful for balloon -like release.

Since that night in 2002, The Polyphonic Spree has remained one of my favorite bands. 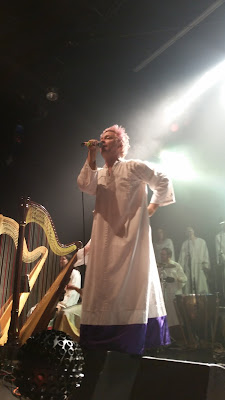 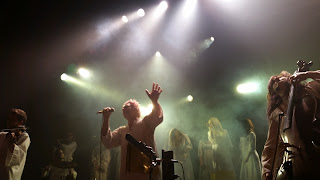 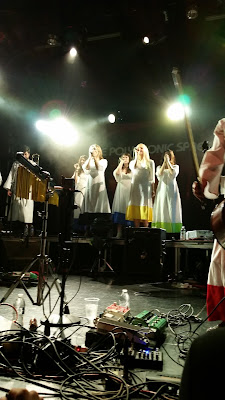 The Spree dressed in their most basic and recognizable garb, which they first fashioned at the time of their debut 15 years ago. 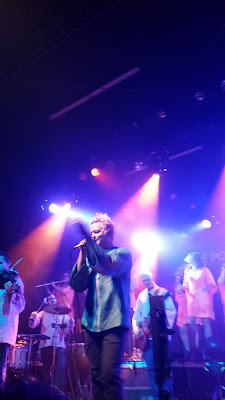 After the band played their first album, The Beginning Stages of..., there was a quick wardrobe change,  and then and then a second set that included their current fine tuned psychedelic pop.

As the music whirled around me, as I look up at front man Tim Delaughter, and see a whimsical close-eyed smile, and a swaying- sailing frame, towered over me. It’s been so long since I've sren a person enjoy music that much. He even shushed the audience when a few strays got to be too gabby.

As I watched this man swell, I found myself remembering the 2002 Tim, who looked like the Messiah,  with his mid-length curly chestnut tresses and extatic calm. Yeah; that's what I'll call it. Prior to that show I read an article in the LA Weekly that offered a brief description of the band, and a clarification from the band. This may be a mis-quote, but I recall, "We are not a cult."

I'm never one to shout out song requests, or bouts of praise, but in my head I said, "Happy 15", and out loud, at the end of the night, I called out, "Thank you."
Posted by Lady J No comments:

This recipe is from the raw food blog, This Rawsome Vegan Life. I love this girl's blog. Emily Von Euw is also the author of Rawsome Vegan Baking, 100 Best Juices, Smoothies, and Healthy Snacks; and on December 8th, she'll be releasing The Rawsome Vegan Cookbook. I  can't wait!

Now on to the recipe.

The dish is topped with cut tomatoes,  cilantro,  and avocado. 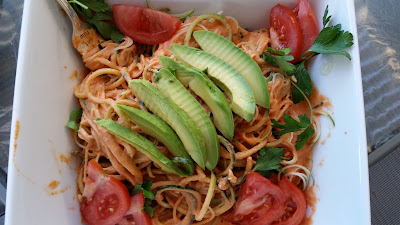 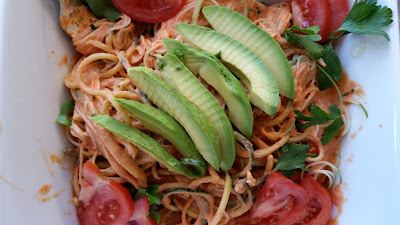 If any of you are wondering,  the "Eat Raw" fork came from Milk and Honey Luxuries on Etsy.
Posted by Lady J No comments:

To Slay the Dragon

I miss dragon fruit!!! Out of season! 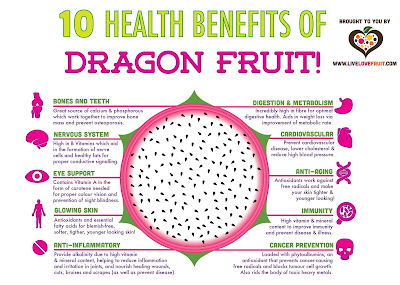 Posted by Lady J No comments:

Lady J
I believe story telling is an art form and blogging is a medium in which to share stories and ideas. Within this blog I hope to cover a spectrum of topics. From the serious to the silly. Here you will read my views and inquiries about subjects such as feminism, other various socio-political issues, psychology, spirituality, sexuality, and general interests such as film, art and music. You will also be exposed to my obsession with cupcakes, tea, books, Hello Kitty, and quirky day to day journeys. I enjoy learning from others as I am constantly attempting to introspect, grow and evolve. During this process I will be jotting down musings on this blog. Pull up a comfy chair and a spot of tea and join me!